“In the context of disability, technology offers some great opportunities but also some real challenges that we need to look out for. We’ve all got a role to play in creating an inclusive working environment,” was the reminder to the audience from Sarah Churchman OBE, Chief Inclusion, Community & Wellbeing Officer at PwC, at our annual Technology Showcase, this year called Disability-Smart stories and hosted by PwC.

CEO Diane Lightfoot and Lucy Ruck, Business Disability Forum’s Taskforce Manager welcomed the audiences and the three speakers who would take to the stage to tell their disability-smart stories. 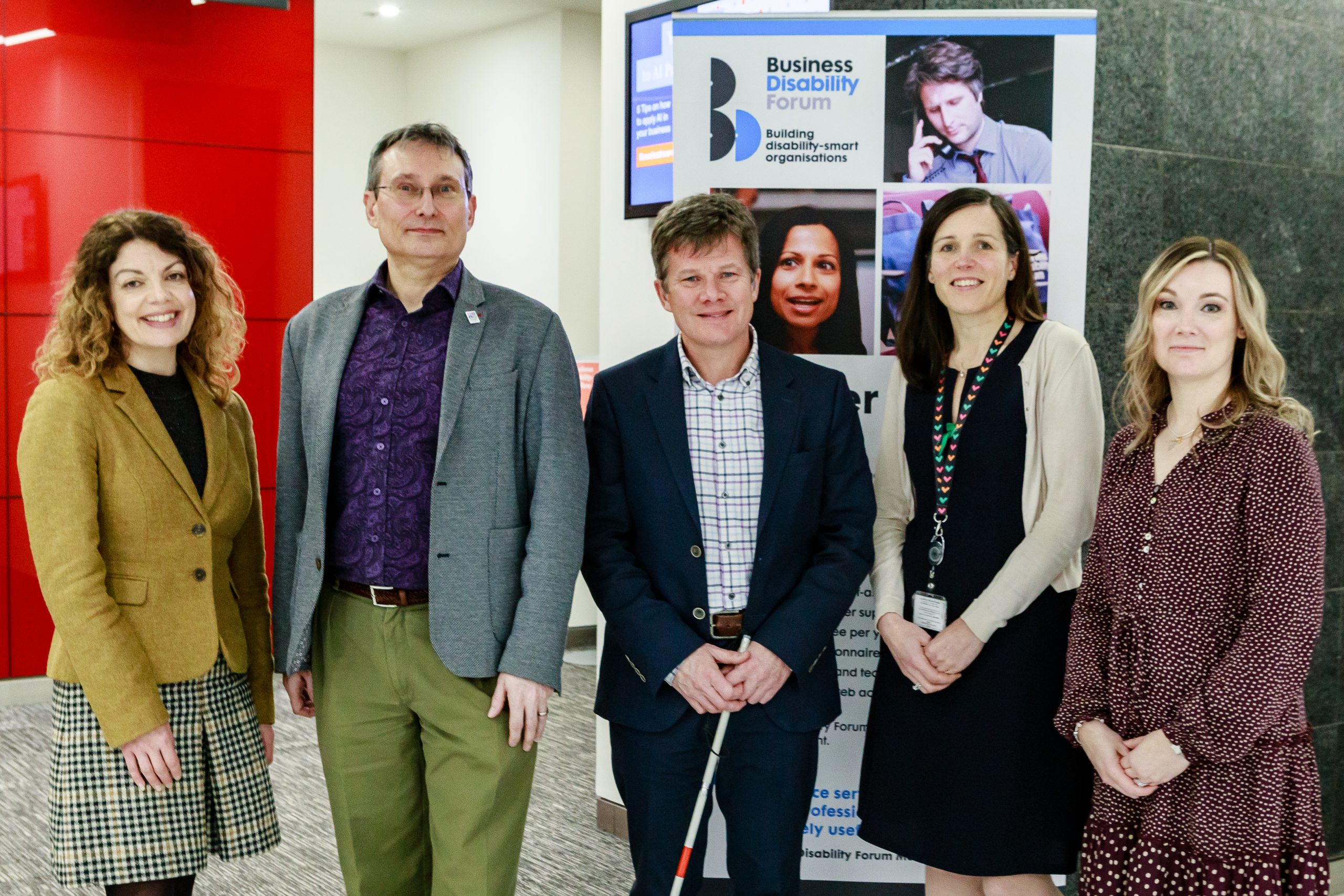 First was Tracey Lenthall, HR Director, PwC, who shared her story of living with dyslexia. She explained that dyslexia sits under the neurodiversity umbrella, those include dyslexia, dyspraxia, ADHD and autism and other neurodiverse conditions – and dyslexia means difficulty with words. She offered the insight that: “the difficulty of words is actually a symptom, not a cause… dyslexics have abilities that are out of balance, so we have difficulties in processing and remembering sounds, and difficulties in putting details in order. This is often balanced by strengths, which is 3D imaging, we see the world from a visual perspective, verbal skills and long-term memory.” She also alerted the audience that dyslexia affects 1 in 10 people and there is a strong impact on everyday life and in your education. It has a very, very strong link to ADHD. 40% of dyslexics have got ADHD. 60% of people who have ADHD are dyslexic.

She added on how technology has helped her: “So how does it manifest itself in me? Constructions of sentences, I find incredibly difficult. What is in my head, I have this amazing creative head, but actually what comes out on to pen and paper, and on to the laptop, is completely – it just does not represent it at all. I love Google for many, many reasons, so what Google is brilliant at now is the whole blue line thing and it just tells you if your sentences aren’t quite right, so you can go back and have a look at that, and recreate those.

“understanding how you can change what was a real negative into an absolute positive… and just being part of the workforce, I think is really important.”

Michael Vermeersch, Digital Inclusion Lead, Microsoft followed soon after and talked about how his disability in the context of the day was autism and dyspraxia. He told the audience of early events in his life how he was “probably was the first pupil in my school also at the age of six to have read from A to Z in an encyclopedia because that’s the amount of times they would put me away because I was disruptive, which was fantastic, because there’s a lot of knowledge in an A to Z encyclopedia”. This contrasted to his times at university experience: “Moving into university, university was easy, I liked learning, that was really easy for me, I just needed to look at a page and I absorbed it, university life, being social there was really easy because the only thing they do is drink and make lots of noise, which I could really imitate… people felt like I was a good person to hang around with, and they gave me all kinds of jobs to do, like being chairman for this and chairman for that, which I did really well, because of my attention to detail, and I liked to have things run really perfectly. A bit like my work now really, apart from the drinking, and that bit.”

He told the audience he was diagnosed in 2016, and stated why: “I felt like I needed to have that diagnosis because the world got more and more hectic and I kind of needed to make some kind of stance and saying, whoa, let’s just stop there, and tell you how you can remove the barriers for me.”

In 2017, Michael was encouraged to present his work more and in 2019 I got the highest award at Microsoft – the platinum award.

Of the role of technology played in his life, Michael added: “Artificial intelligence I think is the great saviour and is going to become more and more the great saviour.” He was evangelical in his love for Office 365, workplace analytics “where it will tell me, you’re having too many meetings, maybe you want to have some focus time, do you want me to schedule that for you? And it will schedule that for me, if I give it permission. Or look, those are the people you mostly work with, those are your stakeholders, your collaborators. Or actually you worked a lot with that person in the past, you have been disconnected for a while”. He also believes it needs to be designed with people with disabilities, to have that insight in there, adding “we don’t want other people to assume what the barriers are for us”. 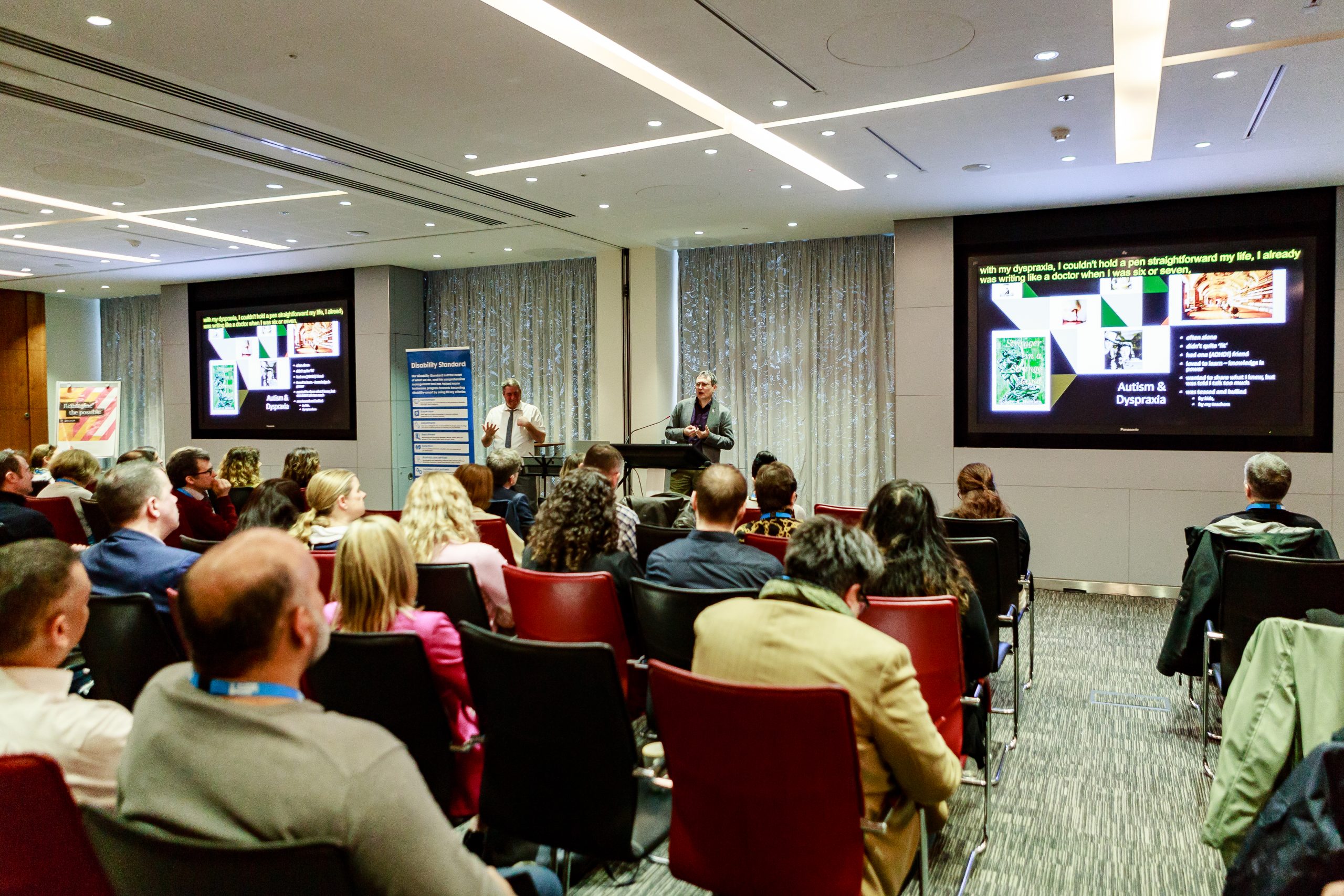 Robert Nolan, Chair, Deafblind UK was the third speaker and told the audience he was born deaf, adding “in the early 60s, it’s a tough thing to be told your child is deaf but that’s what my parents had to deal with”. He felt fortunate though the frequencies he could hear best were around speech. He recalls: “My first bit of technology was the NHS box hearing aid which I wore on my chest with a knitted thing my mum made and it meant I was always different, anyone with young children knows no kid wants to be different.”

He added: “The other thing about hearing aids, they don’t correct your hearing. Spectacles correct your vision, but hearing aids don’t. They amplify, so if you hear mess, that’s all you will amplify, background and foreground, it doesn’t distinguish.”

After his time at university, Robert had hoped to become a teacher after being inspired by his geography teacher. After being informed he could not teach secondary students (in the 1970s), he decided to go hitchhiking, for over a year, however his mother and girlfriend, who later became his wife, realised that his sight had got worse. He eventually decided to go into IT.

Robert is very motivated working with Deafblind UK and Deafblind Scotland, organisations he’s worked with for nearly 25 years. He talked about the role technology plays in finding matches for people who need to communicate who have lost sight and hearing. He shared the story of Clarke and his communicator Christine. “Clarke is like me, has usher’s syndrome. Unlike me, he lost his sight in his late 20s. Like me, he used to go to football matches and support his team with his friends. He now has no sight at all. And guess what? He still goes to football matches with his friends but now he takes Christine with him, the guide communicator. Deafblind UK provide the best-managed guide communicator service in Europe, in Scotland, where they provide 50,000 hours of support a year which is phenomenal, so Christine has no interest in football whatsoever, but she knows more about it than most people in this room now probably. She puts her left hand on Clarke’s wrist and tactile sign language, because he’s also deaf, remember, tactile sign language on his hand. His hand is the football pitch. He knows the players, and he can feel the excitement, and when people start banging on the terraces he can feel it. What I love is the fact that Deafblind UK is enabling Clarke to carry on enjoying his football even though he can’t see it, isn’t that great?”

We ended the event with a panel discussion of all our speakers, where members of the audience were able to pose their questions via the website Slido or in the room. We had a wide range of questions, once of which was what was the one piece of technology that had made the biggest difference, for Michael it was PowerPoint Designer as he could ask artificial intelligence to make the content “look pretty”, Robert’s first “fantastic bit of technology” was the gramophone record and the mobile phone because “being able to follow text and have conversations with your loved ones is marvellous” and Tracey the search engine and Word or Google that highlights spelling and grammar issues.

A big thank you to everyone who attended.

Exhibitors who were at the day were:

Lenovo, smarter technology for all

Texthelp helping everyone read, write and communicate with clarity

Keep up to date with our events here

Tech for life: Rounding up this year’s Technology Taskforce Showcase

Re-imagining the workplace post-pandemic at our Partner Breakfast

Putting disability on the map – our Global Conference 2020