Post-event round up, Research

Time to talk about men?

‘Real de-stigmatisation comes from a realistic approach – and when 62% of men will have a mental health problem at work, you could call it an epidemic’ Dr Seidl

Did you know that almost two thirds of men have experienced a mental health issue where work was either the main cause or a contributory factor? Based on the reaction of the audience at BDF’s Scottish Conference, a lot of people weren’t aware of that before (including me). 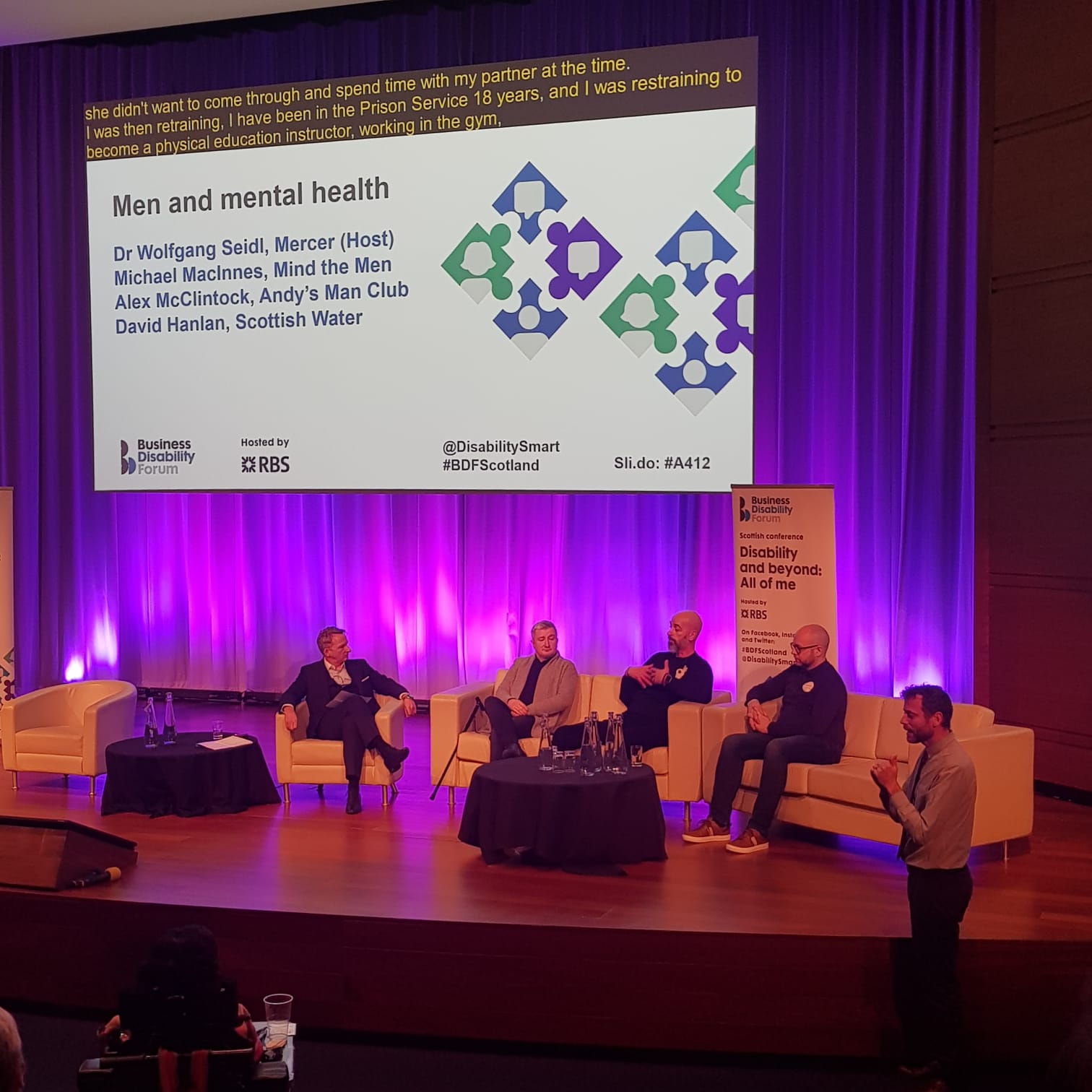 Dr Wolfgang Seidl (pictured left), was joined by Alex McClintock from Andy’s Man Club (pictured second right) and Michael MacInnes from Mind the men (pictured right) shared their experiences as part of a panel on men and mental health. They were joined by David Hanlan from Scottish Water, who also gave a talk about health, work and identity (pictured second left).

One of the most talked-about speakers at Business Disability Forum’s Scottish Conference on 30 January was Dr Wolfgang Seidl who spoke eloquently about men’s experience of mental health and the crisis that we are facing as a society. Whilst mental health is now – rightly – receiving greater attention, Dr Seidl shed light on an underappreciated aspect to the mental health crisis: the link between men’s mental health and their work. The statistics and stories that Dr Seidl shared show clearly that mental ill-health is an epidemic, and workplaces will have to adjust to address it. This chimes with Business Disability Forum’s own research in 2019 which showed how many men feel the pressure to perform to societal standards and expectations and the detrimental impact that has on their mental health.

We also heard powerful stories from men who have been directly affected. Dr Seidl played a video of Richard Wright talking frankly about his experience of mental ill health in the workplace. We also heard from Richard’s manager about what he did to support Richard.

Joining Dr Seidl, Alex McClintock from Andy’s Man Club and Michael MacInnes from Mind the men shared their experiences as part of a panel on men and mental health. They were joined by David Hanlan from Scottish Water, who also gave a talk about health, work and identity.

We also heard on the day from our head of legal and campaigns Bela Gor , who asked whether the Equality Act 2010 is fit for 2020 and this is a subject we will be exploring throughout the year, alongside the 25th anniversary of the Disability Discrimination Act. Bela then joined Dennis Howard from RBS, Jennifer Teacy from Scottish Water and Anna Smith from PWC to discuss the role of employee networks in exploring our intersecting identities.

The day finished with a panel hosted by our Global Taskforce and Partner Development Manager  Brendan Roach about accessible tourism in Scotland. He was joined by Robin Sheppard from Bespoke Hotels, Jan Kerr from the Homelands Trust, Moira Henderson MBE from The Rings and Marina Di Duca from Visit Scotland. The overall message from the panel was that being accessible is not just the right thing to do, it’s good for business too, a messaging reiterated by our CEO, Diane Lightfoot, who closed the day. As she said, when you get it right for disabled people, you get it right for everyone.

We’ll be exploring some of these topics and more at our Annual Conference at the British Library Conference Centre in London on 22 April. Sponsored by our Partner HSBC, our theme this year is “Disability in 2020: Time for Business” so do join us! Visit the conference page for more information and to book your place. We hope to see you there!

Tech for life: Rounding up this year’s Technology Taskforce Showcase