A journey through time… our technology showcase

On 28 February, delegates descended on Technology Taskforce member PwC’s London office for the latest edition of our annual Technology Showcase, entitled “Disability, identity and technology: A journey through time”. 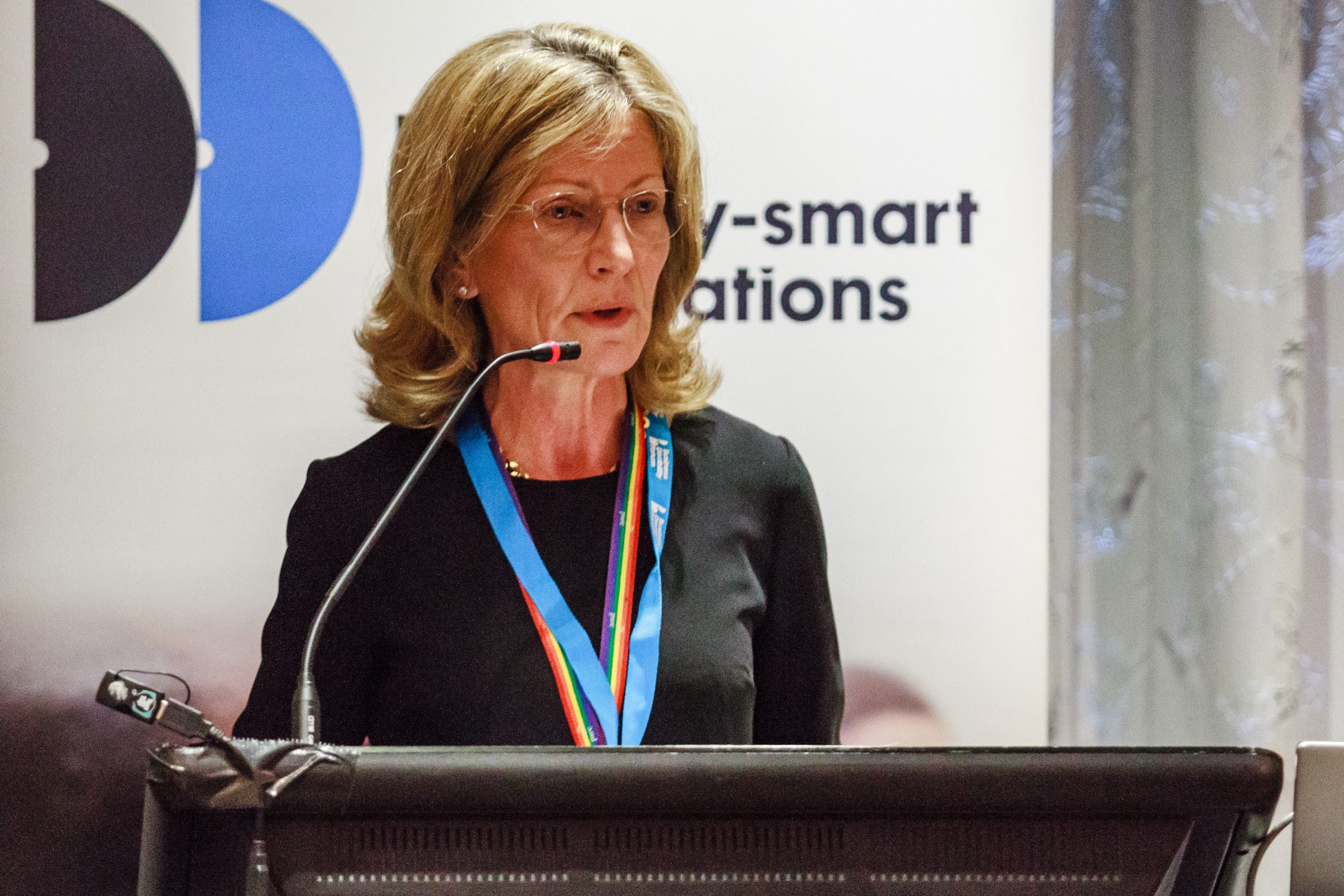 Sarah Churchman, PwC’s Chief Inclusion, Community & Wellbeing Officer started proceedings with a welcome. As PwC hosted on the day Sarah emphasised why she was happy to host the event: “At the end of the day, at PwC, we want to create an environment in which everyone feels they belong, where they feel empowered to be the best they can be.”

Our very own Lucy Ruck led the day and introduced Paul Smyth of Barclays who took to the stage. While many know Paul and the work he leads on at Barclays as their Head of Digital Access, few know about his personal journey, and how he has been “disabled by technology [and] enabled by technology”.

Going from using outdated and cumbersome tech like desk-sized magnifiers and tape recorders(!), Paul worked his way through a 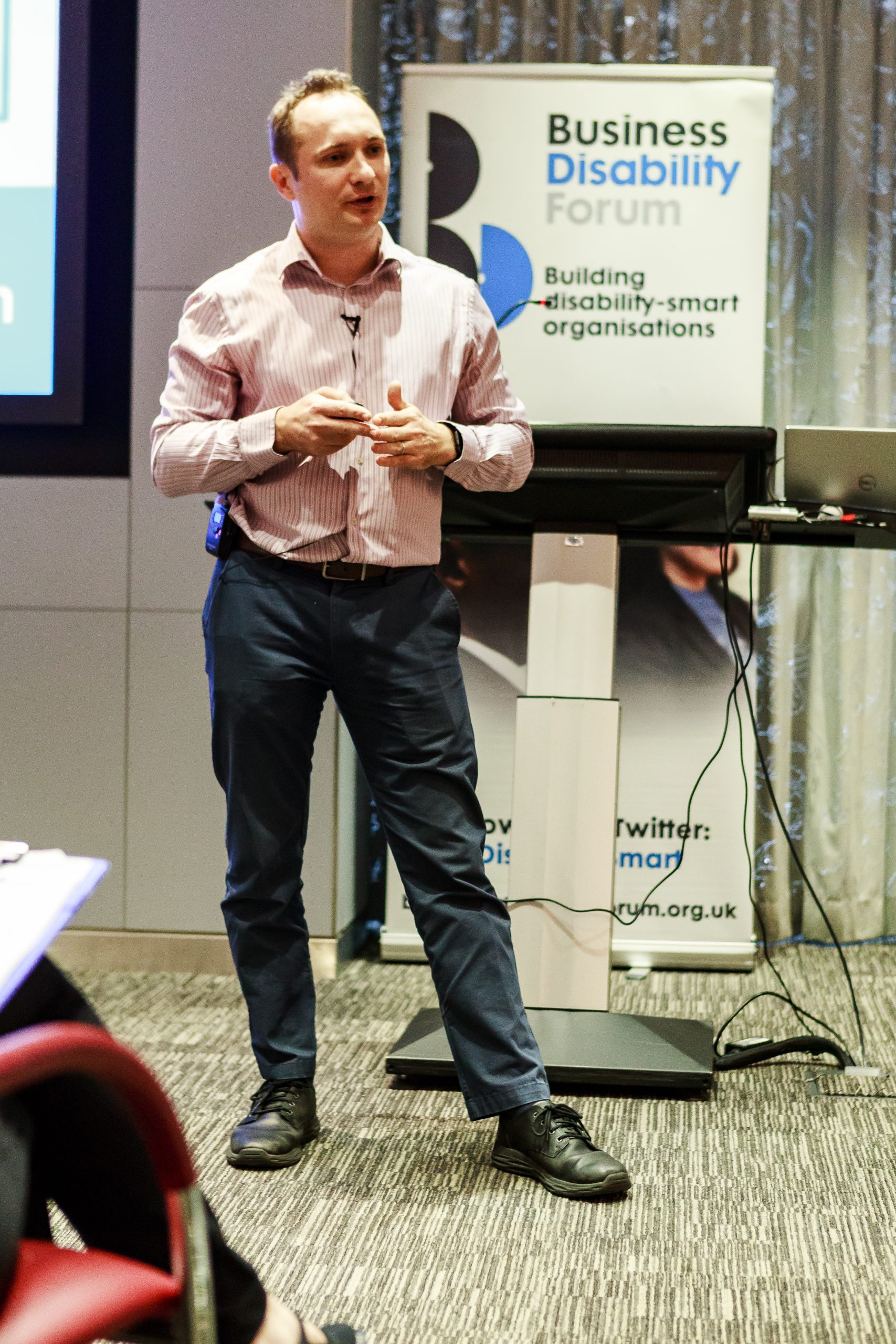 business degree and joined Barclays and has recently been named as one of the Government’s newest disability champions. Embracing his difference and disability has shaped his skillset and work ethic, where increasingly inaccessible technology forced him to “be the change he want[ed] to see in the world” and make things better for the next person like him.

Sharing his story he stated: “…My eight‑year‑old self, I could remember like it was yesterday, hearing from the eye doctor that you will lose most if not all of your sight very soon. I remember my eight‑year‑old self, what scared me, it wasn’t the prospect of going blind, it was the prospect of being different. I think maybe my eight‑year‑old self even then understood there are barriers constructed in the world around us and there are barriers that also exist in the mind of others that shape what we can and can’t do, what we can and can’t above, about capability and possibility.”

Elisabeth Ward of Scope then took the opportunity to tell us her story as a congenital amputee, defining herself through other’s perception of “normal”, when technical support only became available when she got to university and her impairment was finally recognised.

As a child, Elisabeth carried around a booklet explaining why she was different, but she was also determined not to be left behind – and at secondary school the level of understanding was not high: “For example, in PE I struggled to control a hockey stick, and the other students treated me as though this was my fault. I would regularly strain my hand and wrist and the teacher just expected me to get on with it. There was no support to help me find solutions. I never felt like it was okay to say, actually, this isn’t working, I am not like everyone else, and I need it to change.” Overcoming the need to fit into what people expected of her at university and taking advantage of available support let her confidence flourish, which continued as she entered the workplace. 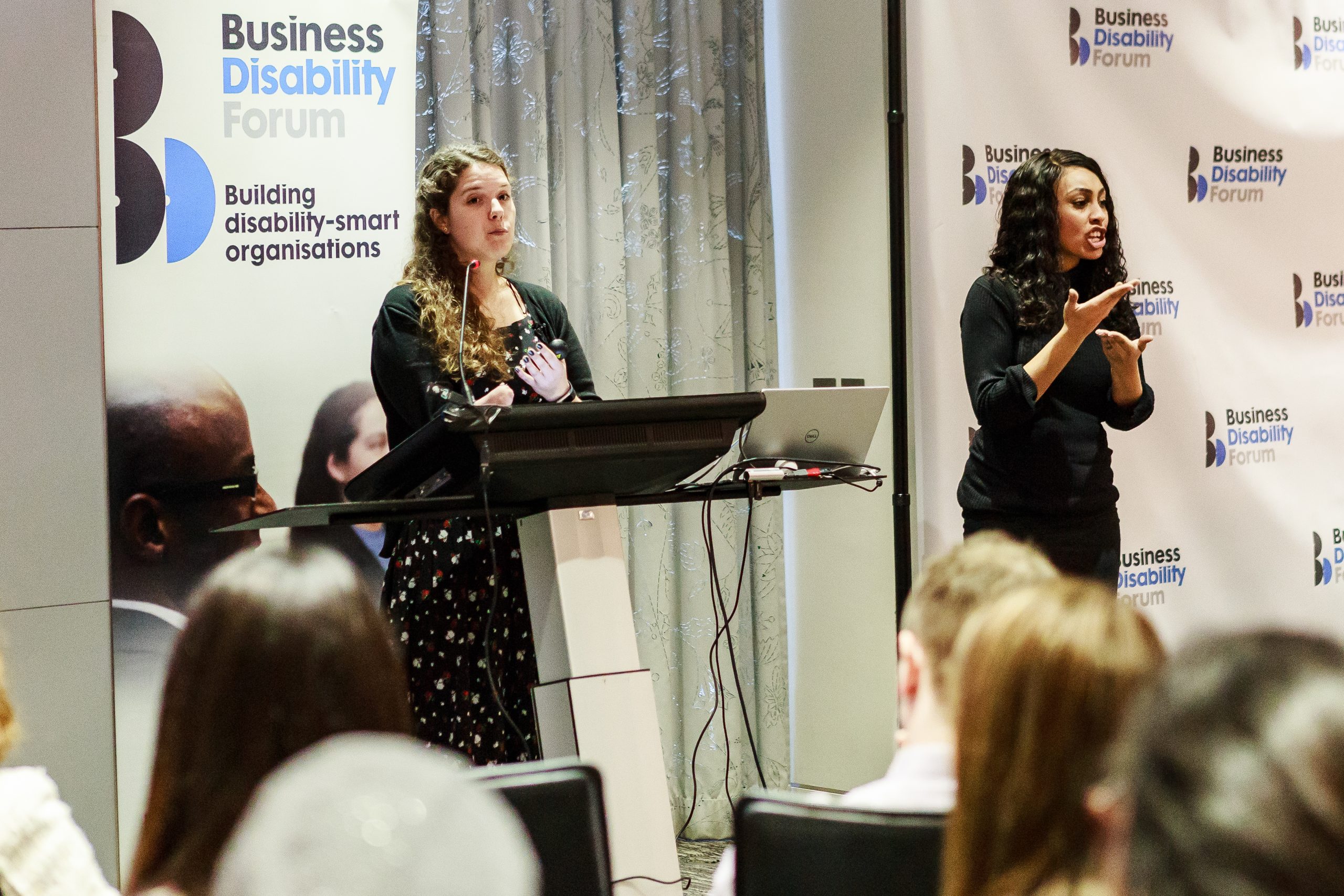 A former boss who likely thought they were doing the right thing unconsciously held Elisabeth back, but assistance from Access to Work changed things dramatically, opening a world of assistive tech like a rollerball mouse and half-keyboard. Working at Scope has encouraged Elisabeth to inspire change from all levels of society and challenge stigmas so that we can all keep learning to provide accessible solutions for everyone. She said: “ I can now stand up in a room full of strangers and openly and proudly say, hey look, I am disabled, I’m missing a hand and this makes me different. Even when I go outside, I no longer have to compartmentalise that part of me. It feels like a whole new world, one where I’m not the problem; it’s society that needs to change.”

Our third and final speaker was James Hallam, Controls Assurance at PwC, who made quite the entrance on his electric-assisted handcycle and told those in attendance about his Functional Electrical Stimulation (FES) handcycle, that has given James the power to use his legs again. 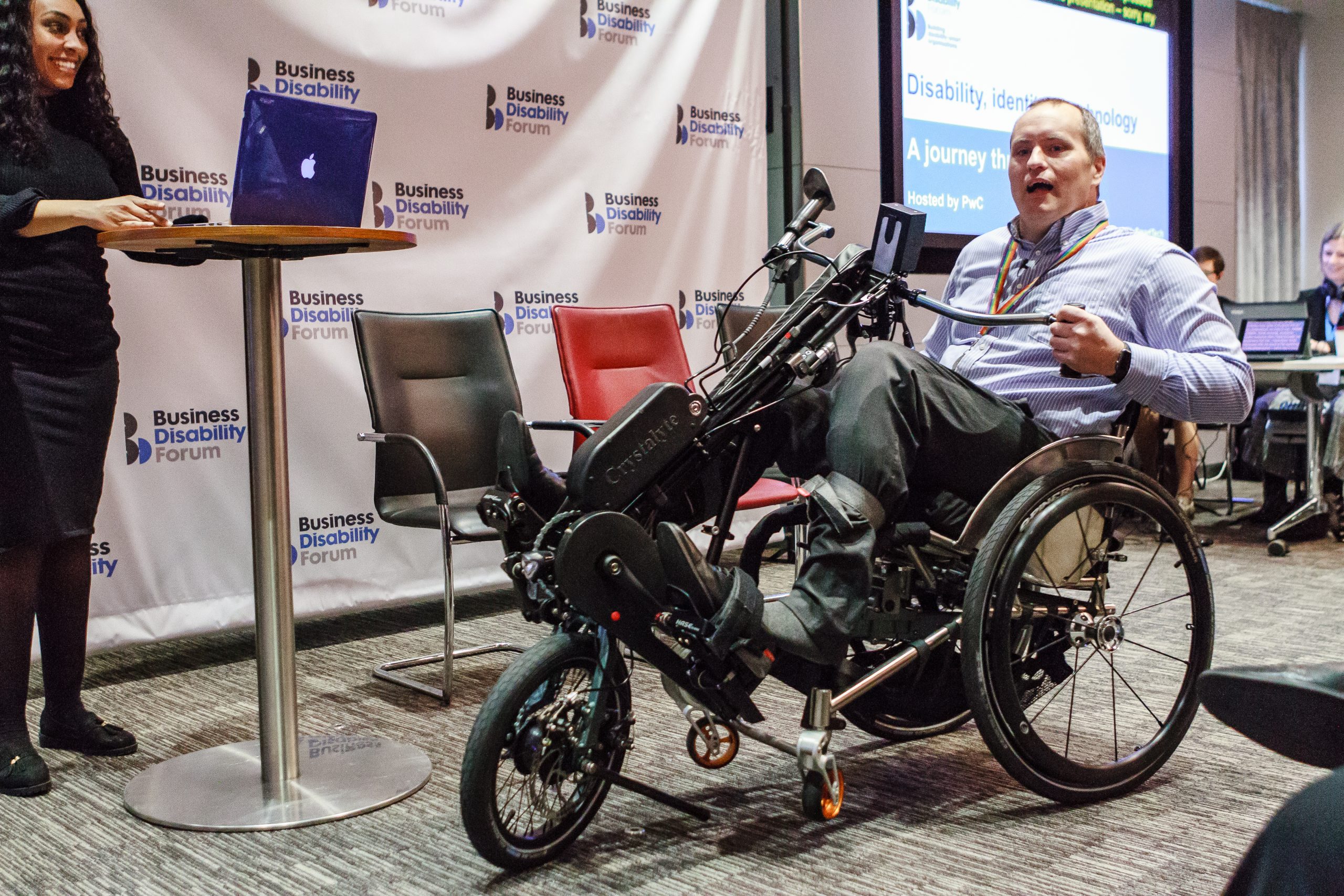 James Hallam, Controls Assurance at PwC, making an entrance on his electric-assisted handcycle

After a cycling accident back in 1996, James’ positivity led him to not ask people for help; travelling across London and using the tube in a wheelchair soon put paid to that! James added that while it’s about you and your approach to the world, but it’s also about how the world approaches you. What was initially diagnosed as a muscle strain but turned out to be a nearly life-threatening broken leg led to James paying more attention to his lower body, and finally starting to use a FES handcycle that enabled him to make his leg muscles work after over twenty years. James then spoke about his own depression, which was assumed had stemmed from his injury, but in fact was caused by something far more innocuous. In the same way that asking for help with a physical disability needs to have the stigma taken away from it, the same needs to be said for people’s mental wellbeing. He stated: “..you can get quite stigmatised or defined by your chair, or your sight or whatever you can’t do, and people don’t necessarily see what you can do. I think that’s a real shame.” 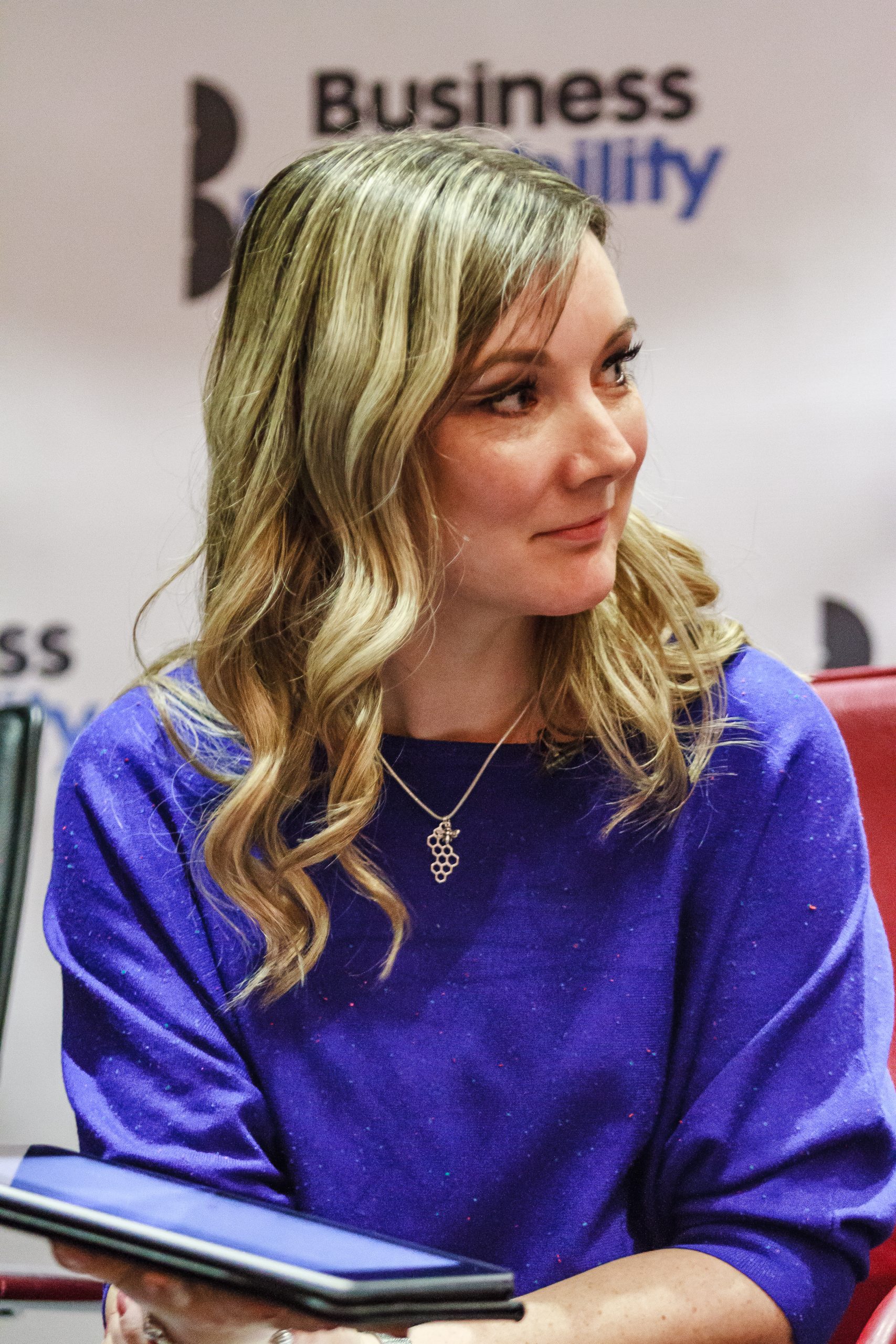 Following a panel discussion with our speakers and host Lucy, making use of the interactive platform Slido, delegates were able to engage with the following tech exhibitors:

Texthelp – helping everyone read, write and communicate with clarity.

Microlink – leaders in the field of assistive technology.

One of the audience stated: “[We heard] really great stories from the speakers, they demonstrated the success assistive technology has had on their lives. They served as great role models for how with support, grit and the right tools, disability dissolves and ability thrives.”

To find out more about our events, visit here

Re-imagining the workplace post-pandemic at our Partner Breakfast

Putting disability on the map – our Global Conference 2020

Time to talk about men?

Working together to drive the disability agenda is #Valuable